Take The Shot – By Angela Calestini

We are talking Jell-O shots here. If you’ve never had one, well it’s about time you did. Jell-O conjures up memories of a Great Aunt’s Christmas gelatin mold dish or those cubed, brightly colored desserts served with the fake whipped cream at the school cafeteria. But let’s not judge. Gelatin has huge potential to be so much more. In fact, it’s the perfect summer treat for your next pool party.

But first, let’s give credit where credit is due. Singer and songwriter Tom Lehrer is believed to be the inventor of the Jell-O shot. He was in the Army but served in a naval base from 1955-1957. Necessity is the mother of invention. Alas, what to do when there is a Christmas party at the base and you can’t bring in alcoholic beverages. In 1955, good ol’ Tom tried various combinations of vodka and orange Jell-O poured into molds and the Jell-O shot was born. He was able to bring the shots to the navy base undetected.

Fast forward 63 years later and there are thousands of recipes for Jell-O shots. We have taken the Jell-O shots to the next level and we don’t even need to sneak them in. They only take minutes to prepare and these recipes can impress your guests. The hardest part about making them is waiting for them to set. Here are some of my favorite recipes.

Fully dissolve the sugar and gelatin in the boiling water.  Add the tequila and lime juice. Pour into plastic shot glass molds. Refrigerate for 2 ½ hours to set. Salt the glass rims with salt and add a mini slice of lime on the edge of the glass.

Lemon Cake Shots – Yes, You Can Have Your Cake

Dip each glass upside down on corn syrup or honey, and then dip in sprinkles. Stir together Jell-O and boiling water until powder is dissolved. Mix in vodka and cold water.  Pour into the sprinkle-rimmed shot glasses. Chill for 3 hours.

Combine the boiling water, Jell-O and gelatin. Stir until completely dissolved. Stir in the vodka. Pour the mixture into each watermelon half. Refrigerate for 4 hours. To serve, cut each half into 1 inch slices, and then cut each slice into wedges. 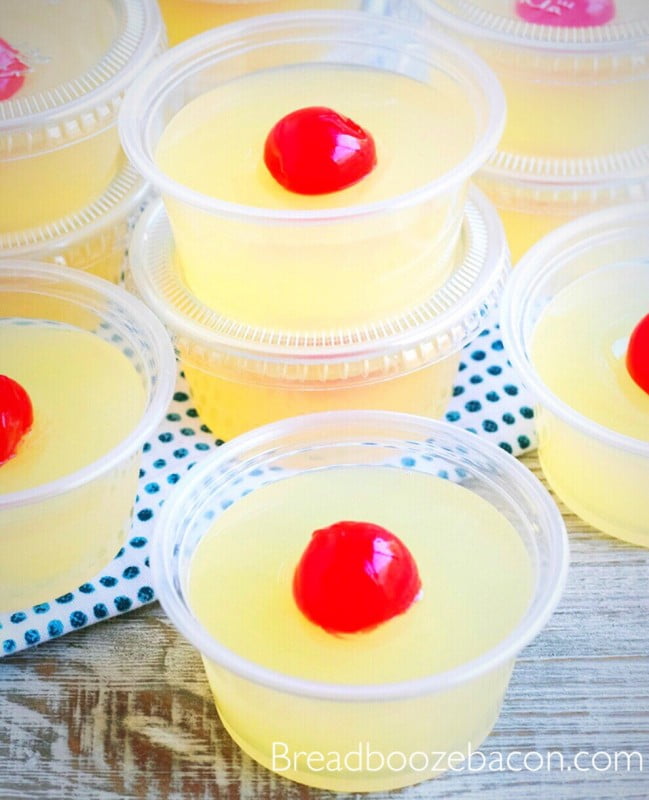 Mix the gelatin powder and the ¼ cup cold water in a small bowl and let it soak for about 2 minutes. Add the sugar to the boiling water and stir until dissolved. Pour the sugar water into the gelatin mixture. Whisk until gelatin is dissolved. Add pineapple juice, coconut syrup and rum. Whisk to combine. Pour the mixture to shot glasses. Refrigerate uncovered for about 30 minutes. Remove from fridge and press one cherry on the center of each glass (partially submerged).  Refrigerate for another 3 hours until fully set.

You can make these recipes the night before. No stress entertaining gives you more time to spend at the pool and with guests. So stir, pour and chill. See you poolside!